[Duke’s we have a new honored guest hanging out at the Kingdom’s finest table for dinner this week, a radiologist and new blogger: XRAY VSN. Learn more about his story and journey with personal finance below!]

If you reflected on the very moment you’re writing this post today, tell us your story – how did you get you get where you are?

I am a 47 year old divorced physician (Radiologist) who is the father of a 12 year old daughter. I have had a very rocky financial path and have experienced the lowest of lows before turning it around to where I am today.

As a physician, despite 20+ years of training, not once were we exposed to finance.  It is therefore quite understandable when people say doctors really are financially naive and prone to making mistakes or being targeted by unscrupulous individuals.  The biggest problem is because of the high income of physicians, the magnitude of the mistakes can be quite large.

I pretty much have made the standard mistakes most physicians go through:

Then there are even worse mistakes I made that made all others pale in comparison:

This chapter in my life was the worst and I lost over $1 million dollars when all was said and done (essentially gutted me of all my savings and retirement accounts).

From Chris -> This hurt my heart to read, and I’m very glad you made financial moves to get back on track; it says much about you.

When did you have an epiphany moment to get in gear towards building a financial kingdom for yourself and your family?

Being at the lowest point of my life both financially and emotionally, while just turning 40, I knew I had no more margin for error if I ever wanted to retire, let alone retire early.

My epiphany happened when I decided I needed to build up my financial knowledge which was sorely lacking at this point. I started reading voraciously any financial material I could find and came across some wonderful financial blogs like White Coat Investor and the Bogleheads that gave me the financial tools to succeed.

I discovered the elegance of passive index investing and promptly changed whatever remaining assets I had into them (previously held in high cost front-loaded mutual funds that a “financial advisor” had placed me in with obviously not my best interest at heart).

I also was introduced to real estate as a way to diversify my portfolio, gain great tax advantages like depreciation, and start building a passive income stream. I didn’t want to be a landlord as I already had a demanding job, so I chose to invest in more passive real estate holdings such as crowdfunding platforms and private syndicators (which specialized in large multifamily apartments).

What are three lessons you’ve learned while getting to the exact moment you’re writing this blog?

What are your big motivators for building a financial kingdom and achieving FIRE?

For me achieving FIRE will allow me freedom.  When you are financially independent you no longer have to rely on a W2 job. You are free to continue working if you want to.  Or you can pursue other passion projects that in the past you couldn’t because you needed to earn an income.

I want to build a strong enough financial kingdom that I will never have to worry about running out of money no matter what the markets may do.

I feel developing a passive income stream allows me to accomplish this as I can earn money without ever needing to touch the capital. When my passive income stream gets to the point where all my basic needs are taken care of and I still have surplus to do activities I want without concern for money, that is when I know I am truly free.

It would also be nice to preserve as much capital as I can to have my daughter benefit from my hard work years after I am gone.

From Chris -> Legacy is on par with my goals as well – nothing like changing your family and the world in a lifetime!

When looking at the kingdom roadmap which milestone are you currently working towards?

According to the roadmap I am probably about ready to graduate your 12 step program.

I am now concentrating almost exclusively on building up my real estate holdings even though I already have a substantial amount of capital already invested.  I feel the more  money I can funnel  into real estate over the next couple of years, the higher my passive income floor will be which is always a good thing.

Have you faced any challenges while working towards financial stability and how did you adapt to them?

As a physician I am fortunate that it is a consistent high paying job that comes with a large amount of stability.

My biggest challenge was the relationship side which was previously discussed regarding my divorce.   It took me 4 years to recover from that and I haven’t looked back since.

If you met someone who was just starting out on their journey towards building their kingdom – what would be your advice to them?

My advice is even though retirement seems far away, the steps you take now will have a huge impact later on due to the magic of compound interest.

Your savings rate will be key in achieving FIRE especially if you start early. The advice to pay yourself first is a time tested one and it works. If you can automate your savings so that the money from your paycheck never hits your checkbook you will be less tempted to spend it – you will always be able to adapt to what is left.

What differences do you see between yourself now and yourself 10-years from now?

I see myself completely retired within 10 years from now.  I originally was shooting for a retirement at age 55, but the way things have been going early 50s could also serve as a launching point.

At that point I would like to have a passive income stream that would allow me to draw around $125k/yr which seems achievable as I am 1/2 way there now.  I know studies say that 90k/yr has been shown to be the point of maximum happiness.  I figure to overshoot that just to buffer against the unexpected.

What motivated you to begin writing about personal finance and starting a blog to share with the world?

I always had a passion for creative writing. I enjoy it quite a bit and have even composed original songs which I have performed for audiences of 100-200 or so.

I soon found out that I also had a passion for finance. It was something as I mentioned I was never formally educated on, but through the school of hard knocks as well as helpful blogs I developed quite a knack for it. I started helping fellow colleagues at work who really saw this passion and they suggested I should blog to reach a wider audience.

My blog goes into more detail of all the mistakes I have made (I actually launched my blog this April to coincide with my 47th birthday and started with a 5 part series titled, “I Made Every Mistake In The Book.”

I wanted readers to know that we are all not perfect.

A lot of people only write about their successes and not about their failures.  I feel it is important to show everyone that we are not perfect.  That we are human and make mistakes just like everyone else.

The key is to learn from these mistakes.   And if someone reads my blog and avoids even one of the mistakes I made, then I know I did something meaningful.

From Chris -> Love this answer. Failure has been quoted as the best teacher 🙂

What are one or two top lessons or some advice you could share on building a great blog like yours?

The biggest lesson I can offer someone contemplating starting a blog of their own is just do it. The entry fee into the blogosphere is minimal.  For under a couple hundred of dollars you have everything you need to buy a domain and a host and the rest is just a time commitment and a labor of love.

Another thing that I am glad I did was create a lot of content before I ever launched my blog. I had about a month prior to launch date when I bought my domain. I used that time to build up 30 posts (I decided I wanted to do a 2x/wk post schedule so that gave me almost 4 months of material).

When you first launch a blog there are a lot of things that you may need to troubleshoot etc. Having already prepared content takes that off your plate so you can put out the initial fires that will occur.

The other thing is be patient and persistent. I am not going to lie, it is easier said than done.  After all your hard work when you publish your first post you just expect the internet to take it by storm and love it as much as you do.   That just doesn’t happen.

Sometimes you get lucky and a big time blogger (for me it was the White Coat Investor) sends traffic your way with an introductory tweet. But after that initial wave of visits, it suddenly died down the following weeks and you question why on earth are you pouring your heart into this when less than a handful of people are stopping by.

But a magical thing happens.  If you write good content, word will spread and slowly the page views start rolling in. Much like the capital snowball you need to make the initial effort and stick with it until the system becomes self-feeding.

Why do you feel is it so important to spread knowledge to high income earners on the smart moves to make financially?

With our progressive tax code there is a need to find ways to best take advantage of the tax system.

With larger amount of money comes higher risks. When your portfolio is at its infant stage, a market swing of 10% may only mean you lose 4 figures. When you get into a 7+ figure portfolio that same market swing could mean 100s of thousands of dollars.

Also people with high incomes think that they can get away with everything as they rely on that high income.  I know doctors making mid 6 figure salaries that still live paycheck to paycheck with that mentality.  They essentially spend everything (or more) they make. You will never make any financial headway with that attitude.

Have any other ideas, thoughts, or advice you would like to share with our readers? The floor is yours!

This allows you to avoid selling and locking in losses during market downturns.   Once your passive income streams can support your basic needs, the rest of your portfolio is gravy.

That’s the end folks – thanks for stopping by and doing the interview with us Xray! 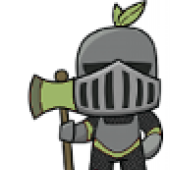 Is coffee roasting your savings? If so – it’s an EMERGENCY!

Committing to Financial Stability – Are You Brave Enough?

An Investment Opportunity for Coffee Drinkers!!

Choose a Budget Strategy for Your World – Budget Series (2 – 3)